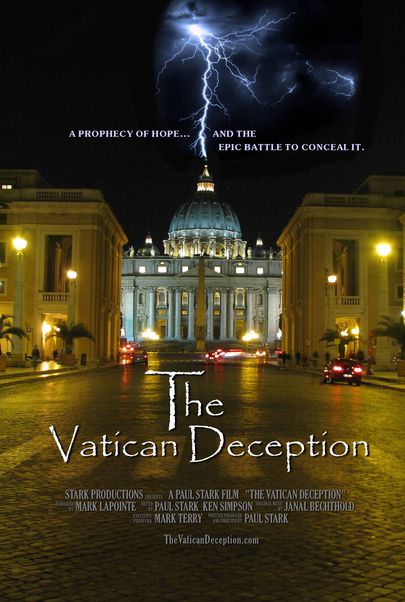 The Vatican Deception is a new feature documentary film that investigates a series of church-approved prophecies and the Vatican plot to conceal them. It exposes why these … Read more...

The Vatican Deception is a new feature documentary film that investigates a series of church-approved prophecies and the Vatican plot to conceal them. It exposes why these prophecies are at the center of the greatest crisis in the history of the Catholic Church. The most notable of these prophecies was revealed by three children in Fatima, Portugal, where they reported seeing the Virgin Mary in 1917.

Since this year marks the centennial anniversary of the Fatima prophecies, and the global devastations they warn about now seem to be imminent, this timely story is expected to draw considerable attention among audiences throughout Europe. We are releasing the film across Europe this Fall – beginning with a UK release on November 17, since we believe the themes of global war brought out in the film and predicted by prophecy will be particularly impactful around Remembrance Day.

Our PR firm is prepared to begin promoting the film this week in the UK media, where the film's success can be expected based on the subject’s vast audience appeal, and due to the story’s resemblance to the popular fictional series of Dan Brown films like “Da Vinci Code” or “Angels and Demons”.

Our experience has shown us there is an insatiable appetite for revealing insights about the Vatican, and our documentary delivers these powerful insights with journalistic integrity, an investigative style, and incredible revelations that we're confident will resonate with our audiences. We are also connected with a very strong network of Catholics throughout the UK and Europe who are eagerly awaiting the release of the film, and we will communicate the release date to them as soon as we receive confirmations about theatre locations and show times.